I have been wanting chickens for years.  They are cute, good garden worker and they will give me eggs.  I have not gotten them before now for several reason but the big one is them not actually being legal here.   The people I have talked to in the government swear that is going to change this year.  But they have been saying it for years already.  So by getting chickens I am taking a risk.  Lot of people have them, everyone (government people and people who have them) says it should be ok, but it might not be.  If a neighbor complains I could loose them or get fined or something.  But part of getting the law changed is making it more commonplace for people to have them, so I have decided to go for it.

I got my chicken in two groups, one week apart.  The first group was from Chattanooga.  It was a long drive and they did not bring the birds I wanted most (Americanas), which is why I had to get a second batch.  For the first few days they would just fall asleep randomly and fall over. Chicks are sort of delicate, so the first few times they did this I was afraid they were sick. But I figured out pretty quick that they were just sleepy.   The breeds of the group from Jan 28 are two Barred Rocks and two Buff Orpingtons.   One of each is for my friend Erik when they are big enough to live outside.  If I can bear to part with them.   I love my chicken babies.

The next Friday I got another three chicks from a nice guy in Austel.   He only sold them if you bought at least three.  I have no idea why that is.  I got the the two Americanas I wanted and I also got a Leghorn.He had a few types to choose from but the leghorn was least like all the others I have.  She will be my only white egg layer, and my only white bird.  Leghorns are not as docile as the other breeds, sometimes they are insane.

When I put the groups together I was afraid there would be fighting, but it only took about 20 minutes for them to be a happy flock.  All seven do everything together now, I think there might only be one brain between all of them when it comes to some things.  I guess that is why they are called a flock.  The Americanas seem to be the smartest, the leghorn the most aggressive.

Having chickens is lots of fun so far.  They mostly hate me and scream every time I touch them, but they will eat out of my hand if I stay pretty still. They are confused about freckles (which I have lots of) so they have pecked at them until I have bleed a few times.  I hope they don’t get a taste for human. I don’t want to be found dead in the back yard some day killed by chickens.

Right now they are all between 3 weeks and 1 month old.  I am amazed at how much they have grown and changed in such a short time. The biggest Buff is almost compeletly feathered now, and the others are not far behind.   I have a hen house for them but it needs some work (it was a children’s play house) but no closed in run area yet.  At the rate they are growing they will be ready to go outside in less than a month. 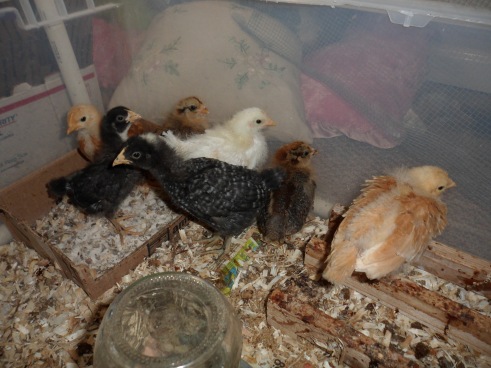