As you might know, I have a collection of short stories published.  In case you have been toying with buying a copy but you want to sample the merchandise first I have decided to post a few excerpts.  You can also read some of the first story by “looking inside” on the amazon link.

I hope you enjoy it!

I miss hiking. I wonder if I will ever get to do that again. My favorite time to hike was always the fall; the red and gold leaves and crisp air made me feel like I was someplace alien. I loved a hard climb up the side of a mountain or rough hills. I guess hikes with my mom as a kid are what first sparked my interest in geology. I found the different colors, textures, and shapes of the rocks fascinating.

When I was twelve, Mama took Alex and I to the Grand Canyon during summer vacation. If it had not been for all the other tourists, I could have believed I was on another planet; I remember pretending that I was. The Grand Canyon is beautiful and strange. Each stratum a different shade of orange or tan, each wall cut in a different shape. Horseshoe Bend was my favorite part; it did not look at all like something that belonged on Earth. Anytime I daydreamed about my first walk on Mars it was just like the Grand Canyon, but with me in a space suit and completely alone.

Something strange happened last night. I was sleeping in the quarters I had shared with Captain Johnson, in the hammock which was modified after my injury. We all strap in before sleeping so we don’t float away. But mine has some extra support to keep my leg stable; once in place I can’t move around quickly or easily.

I woke up around 3 am with that prickly feeling of being watched. I had the impression that I was not alone. In order to turn towards the door I needed to release my leg from the harness. While I was doing that, I heard the door swish open and closed.

I think Richards was in my room.

I had taken some pain and sleep medication before bed. So it was with some difficulty that I got to the door and locked it.

When I woke up this morning, I thought it might have all been a dream. The sleeping pills have given me some pretty crazy dreams. But my door was locked, and I never locked it before now.

When I relieved Richards a few hours ago, he said nothing about entering my room. I was hoping he would say something about it right away. Like maybe one of those red lights had warned him something was wrong with the air in my cabin, or maybe I had hit the comm button on accident and he was coming to check on me. But he said nothing about it. He just smiled his bloody smile, told me the night shift had been pretty quiet, and asked what I was having for breakfast. 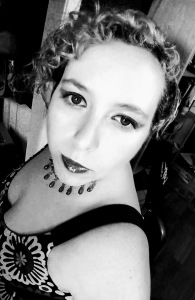 KITTY SARKOZY is a fantasy, horror, and sci-fi author who comes from a long line of schemers and dreamers. She lives in Atlanta.